Finally received a communication back from my PM yesterday and, unfortunately, there's some bad news (just like I feared).

Here's the story so far (summarized)....

The subs who did the foundation did not notch for a basement window at one the locations as indicated in our Milan floor plan.  Our floor plan showed two windows in the basement - we only got one... and it's the one in the UNFINISHED part (there is only one in the finished portion.. that's the one we're missing).  Naturally, I informed my PM.  He said basically that he was looking into getting the window. I said okay and waited to hear back with an update on the window.  And then waited more, and more..... Lumber delivered on 1/6/2016.  Had some freezing temps and a few snow showers.  A week later... still no work done to the house.  Lumber continues to sit untouched, now under all the snow, ice, and rain that has fallen.  Other houses under construction in the new neighborhood that were "behind" us now suddenly "catch up" to us in terms of progress.  More snow, some rain, low temps, another week later, and still no word from PM.  I call Sales Rep.  She tells me that our house is still on schedule and not to worry because even if it seems like they're not doing anything on the house, things are always in motion .  Also find out that our PM has been on vacation and won't be back until 1/25/2016.  Am now worried... still no work done on the house and I just KNOW we're falling behind schedule at this point.  Lumber continues to sit.  A week later (on 1/27/2015), PM is supposed to back on the job by now... I drive by the site... still no basement window and no other progress whatsoever.  I e-mail PM asking for an update.

Here is the floor plan I received from Ryan Homes with the missing basement window circled: 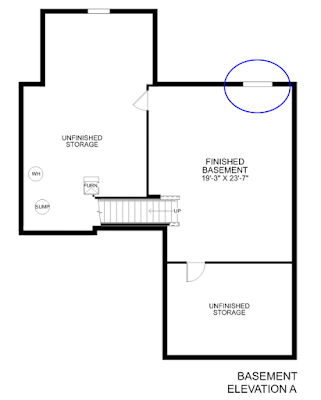 PM e-mails me back and states that he is "surprised" that no work was done while he was out, but says the workers are behind because of the bad weather.  Says that we are now delayed ONE MONTH.  Okay, so guess how long it's been since they worked on our house.... ONE MONTH.  Now we're delayed... ONE MONTH!  I understand bad weather makes things harder and sometimes slows things down, but Ryan Homes ASSURED me that their subs still work during winter weather.  Not to mention, it has been cold, but there have been several 40 degree plus days where I have drove by and STILL there was nobody working.

I am not quite sure what to do. I am kinda upset about the window and feel like Ryan Homes shouldn't be giving out floor plans with windows if, in fact, there aren't any.  ON TOP OF EVERYTHING ELSE..... WE'RE DELAYED A MONTH, WHILE OTHER HOUSES ARE BEING WORKED ON INSTEAD OF OURS.

I AM OPEN TO SUGGESTIONS AT THIS POINT.  Does anyone know who I might call or e-mail to complain about the situation about the basement window?  SOMEONE needs to know at Ryan Homes that if they don't plan on including two windows on the Milan, then the floor plan they're presently giving customers is MISLEADING.
Posted by duromo81 at 9:22 AM