We have landscaping now, and it looks good from a distance, but the company that did it, Green Pro, was not very detail-oriented.

I don't have close ups of the problem areas, but here is what we had trouble with so others will know what to watch out for: 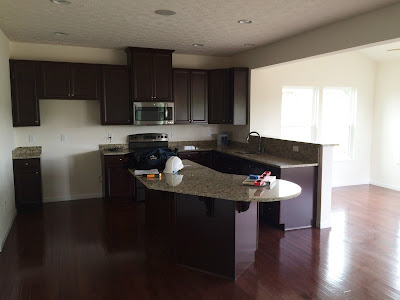 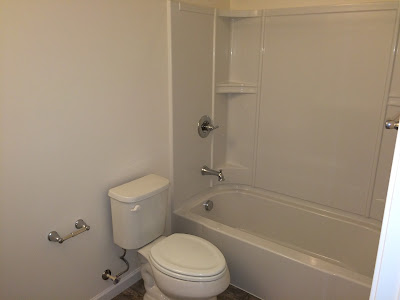 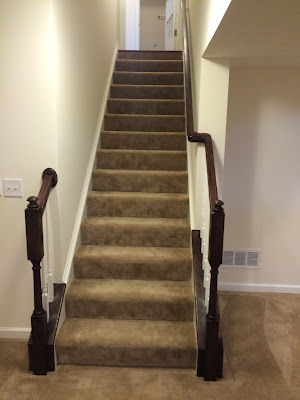 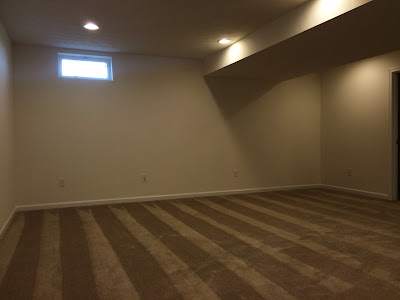 We've got Counter-tops and Appliances!


On our visit today we found that Ryan Homes had installed our granite counter-tops (santa cecilia) and our appliances.  Our impromptu visit consisted of a lot of discussion with Andrew, our PM, about the possibility of having shelving installed in the laundry room, which he agreed to do.  THANKS ANDREW.  They've also begun to lay carpet as of this post, and are stair railing is also stained now.  Didn't get any photos of this, but it looks great.  I'll try to get photos of it in the next post.  For the most part, trim is done and there is only one more coat of paint to go.  Because of time constraints, I was only able to get a shot of the kitchen today (see below).

The one issue we found out is that the counter-top installers cracked the piece of granite that is supposed to connect the breakfast bar to the counter-top... basically a granite back-splash that goes behind the sink.  Was told they had to order a new piece and it would be installed soon.

We're a week and a half from closing!

Here's the ONE picture from today:

Over the past week, I've been able to get about one photo a day of Ryan Homes finishing up the exterior of the house.  It has really come a long way and, as of the this post, they seem to be pretty much wrapped up.  The only thing left to do is for them to paint our front door (it will be black).  It all looks great - my only concern is some of the trim (purely decorative) pieces on the final photo look a bit "off" from where they should be.  Also, it seems like a long piece of white trim is missing on the porch between the siding and the stone.  The white piece coming down just above the porch looks like it should continue all the way through the porch. Every photo I've seen of the Milan version 6 has this trim piece that seems to be "missing" on ours.  I'll be following up with my PM about these things and will post any updates.


This past week, they've been working hard and we now have cabinets, wet-zone flooring (hardwood and vinyl) installed in the house.  The fireplace granite surround and mantle were also put in.  I must say, I am really happy about the work and even more happier about finally seeing our flooring/cabinet/color selections coming together.  They look even better than I had imagined!  It took them about a week to get all this done.  We now have toilets in the house too but I didn't get any pictures of those or the bathrooms.  The upstairs secondary bath is all but done (sans the sink), and the master bath still needs a sink and a glass shower door.

The interior doors have also arrived and are sitting in the garage awaiting installation - they look great!

One thing I'll say after seeing the bathrooms come together is I wish we would've upgraded the master bath to tile and a fully-glass shower.  We originally had this selected but cut it out at the last minute trying to save costs, but hindsight is always 20/20 - if we had known then what we know now, we would've kept the upgrades.  I guess this will just have to be one of the many projects on my ever-growing list of things to do after closing.  Speaking of closing.... we're only two and a half weeks away!  Yay!

Here's some pictures we were able to get... 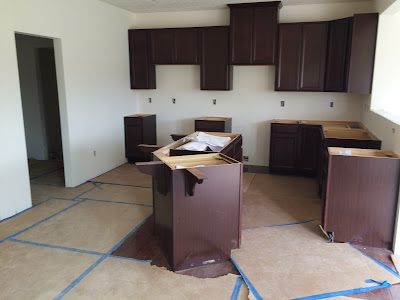