So, as evidenced by my previous posts, we are getting the finished basement in our new home.  What irks me about Ryan Homes' finished basement jobs is that they typically only finish about HALF of the basement (sometimes less) and leave you with a crap-load of (what seems like) unnecessary storage space.  Granted, some unfinished storage space is desirable, but I would say a ratio like 75% finished, 25% unfinished would still yield plenty of storage space while giving you a bit more living space too.

To make things worse in our case, with the Milan plan, the basement situation is aggravated by the awkward design.  They just put things in weird positions such that it hinders the expansion of the basement.  A perfect example of this is that they put your bathroom (or bathroom rough-ins) right in the middle of the floor plan!  Basically, if you ever want to finish the unfinished (or "storage") space, you'll find that you either can't, or you'll have to move the bathroom (costly), or you'll just have to deal with the bathroom being right in the middle of your open space (which would look really weird IMHO).

To demonstrate what I am saying, take a look at these unmodified basement plans for the Milan: 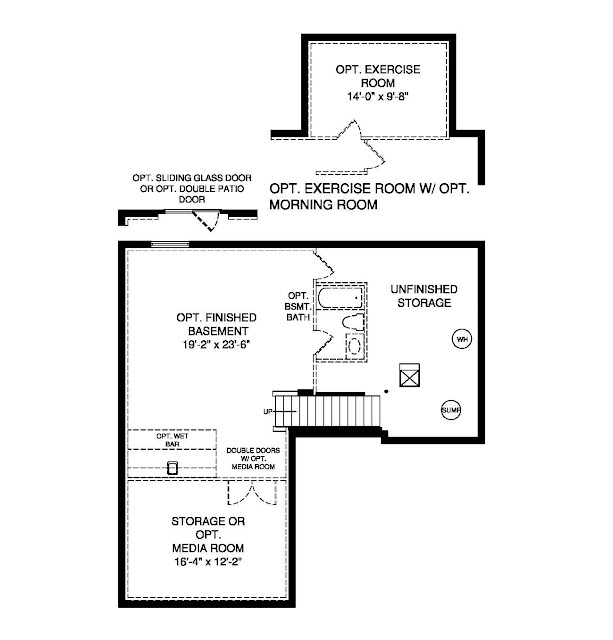 So, after being pretty unhappy with the "out-of-the-box" plan, I decided to make some changes.  Take a look: 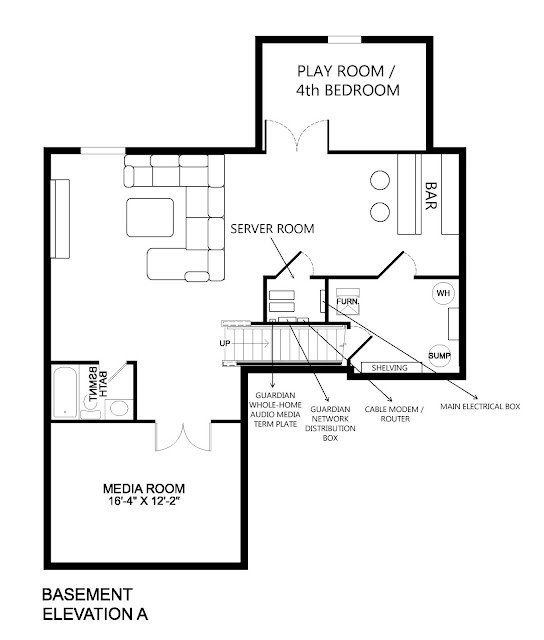 This is the compartmentalized design that I am going to hand to my project manager.  I expect for them to push back a bit, but the ONLY thing I really need them to do is to move our bathroom rough-ins.  They don't have to finish the rest of the storage space - I don't expect that at all.  I expect them to wall it all up according to their plan and I will change the configuration later the way I want.  But, you see what just moving the bathroom can do for this layout????  In this design, I have everything placed (including our Guardian equipment) according to how I am planning to change the wall configurations in the future.

On a more personal note, I am a bit let down by Ryan Homes in the basement (and bang for your buck) world.  On every basement design that I've seen for them, they only give you a small area as "finished" then charge you extra for any extra finishing you get (e.g. media or exercise room).  That's very convenient for them.  Personally, I think they should finishing those spaces with the pretty high price they are charging to get the finished basement.  Beyond that, I don't like the fact that they don't seem to give you any leeway to customize anything in the basement (wall configuration, etc.) and, from what I've seen so far, they're pretty resistant to any changes that you do propose.